The sale of Ocean Plaza is part of Decron’s ongoing business strategy to divest itself of its commercial office assets prior to the possible changes to California’s Prop 13 that would alter the structure of property taxes for commercial properties within the state.

Since 2015, the Los Angeles-based real estate investment firm has pared its office and retail holdings in its portfolio from 40 percent to what is expected to be 15 percent by year-end to focus almost exclusively on multifamily.

“Proposition 13 notwithstanding, we have made a concerted effort to focus more on building our multifamily portfolio where cash flows are more consistent and growing at a faster pace than commercial by expanding into new markets throughout the Western United States,” said Decron CEO David Nagel. “There is a shortage of affordable quality housing for middle income earners throughout the western region and we are focused on trying to find solutions to that issue.”

Decron purchased Ocean Plaza in 2006 but within five years of the purchase, the property’s occupancy dropped from 90 percent to less than 60 percent. Decron invested $17 million in renovations and tenant improvements to reposition and re-stabilize the campus. New anchor tenants to the mixed-use project include Ocean Media and UFC Gym. Occupancy of office portion of the project was approximately 85 percent at closing and 95 percent for the retail space.

About Decron
Decron is one of the largest privately-owned real estate firms in California with 2018 revenues of $222 million. Decron’s portfolio includes approximately 7,700 apartment units and 1.5 million square feet of office and retail centers throughout California and Washington. 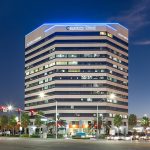 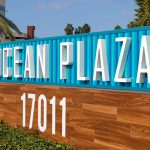