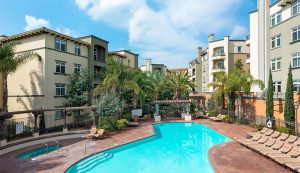 With corporate offices in Los Angeles, Decron Properties remains true to its origins. We began and we remain, first and foremost, builders. Even though our business continues to evolve, the role of “builder” is still an apt metaphor for our vision and culture. Builders create and maintain a legacy that endures and appreciates over time. Builders are all about enhancing and adding value. From ground up development to value-add/rehab to asset repositioning, our investment and business strategy is deeply anchored in value creation.

At Decron Properties, we take ownership of, responsibility for, and pride in all our projects. This approach allows us to create lasting value for our residents, tenants, employees, and investors. Our company experienced a storied first 55 years. We look forward to continued growth and success in the decades to come.

Sensing opportunity in Southern California’s rapid growth and determined to succeed in his new home country, Jack Nagel began building single family homes for US Army veterans. With time and tremendous determination, his business grew and prospered. The company went on to build thousands of homes in Los Angeles, Orange and Ventura counties. Eventually, the business transitioned to include multifamily residential apartments. Jack focused on West Hollywood and other budding areas of Los Angeles. In the 1980s, while continuing to develop income properties, he expanded into retail and office properties. Not content to merely work as a developer, Jack operated all of his completed projects together with his son, David, who joined him in 1981 following his graduation from New York University. David, who also has an MBA from the University of Southern California, served in both the construction and property management divisions for the company.

In 1988, David was appointed President of Decron Properties Corp., overseeing all aspects of the real estate business. Under David’s leadership, Decron aggressively expanded its portfolio by investing in more than 20 multifamily, retail, and office buildings. The company continued its legacy of construction with major development projects throughout Southern California. The overwhelming majority of residential and retail projects developed in the 1970s and 1980s are still owned and managed by Decron today.